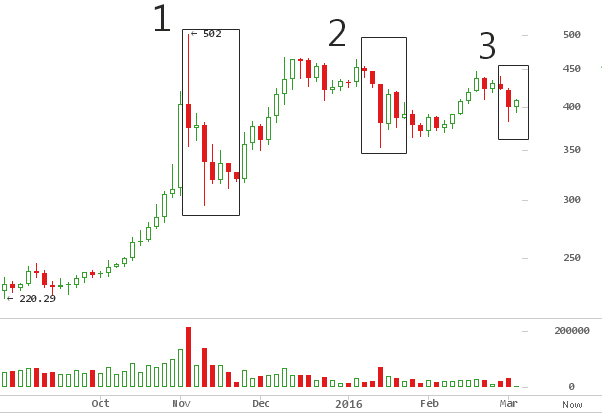 Last week’s bitcoin price report
signed off with this forecast:

“This week bitcoin is bearish in the immediate short term, with targets
for a low rebound at $400, and an allowance to $385.”

This week, bitcoin markets moved precisely as forecast, down to a low
$382 on Bitstamp. The price gradually fell off a cliff on March 14 at
16:00 UTC, drifting lower over the next 24 hours till $382, accompanied
by high volume on the 2 hourly chart above. As of writing this, a
retracement is taking shape, with buy and sell orders settling at
$406.

Sentiment amongst traders has quickly turned bearish, in part due to
their short term mental models. On a longer monthly period, not much has
changed as this move was mostly expected, and has occurred at least 2
previous times since November 2015 $504 peak high.

While of different magnitudes, (1), (2) and this week’s (3) have drawn
similar reactions from day traders. Longer period traders have focussed
on the larger high probability triangle pattern forming here. It is a
favoured count, that could well fail, but, it fits well with the pattern
emerging from these drops.

Eboard10 on
bitcointalk,
Night’s Watch by Afrikoin thread, says it is an Elliott Wave 4th wave
triangle seen below.

“Looks like a triangle is shaping up before we resume the up trend to
find a C wave top of the B wave of the full correction since the $1163
high. However, if we break the ~$380 level, BTC will likely resume the
downtrend straight away.”

This week’s decline is part of d-e, an expected fall for a while now.
Ideally, this triangle should break out to the upside, after e settles
on a reasonable support level.

“As long as the triangle holds, things should look better soon. That
poke of the lower trend line happened… Probably stopping some longs
out. We’ll soon see how it pans out.”

This according to RyNinDaclem on bitcointalk, citing Elliott Wave
guide for this pattern.

“triangle is valid to the C wave low ($352.50 but no less). I kind of
expect a failure to hit the lower trendline (something around $400),
but would not be surprised to see a slight break of it to trip the stops
that are based on that triangle”

This is one possible outcome that a lot of traders are holding their
breaths for, an upside turn in time for the 12.5 BTC halving mania.
$385 may fail to hold, forcing price to the next stop at $352, a low
from January 16, 2016 break down. Right after, $310 sits from November
2015’s sharp sell off. Both highlighted on the chart below.

When Mike Hearn dramatically exited the bitcoin project, claiming it had
failed, price fell 15% on this sentiment. This was b-c within the wedge
triangle chart above, from $443 to $352. An uncanny resemblance was
this week’s drop, mired in all the doom saying on blocks filling up,
delayed transactions, and the scaling bitcoin community split.

“Market using the current sentiment to shake out those who thought they
were strong hands before the halving. Maximum pain, no free rides”

Coinbase CEO Brian Armstrong and Bitcoin Chief Scientist Garvin Andresen
both shared their opinions of discussions that took place on February 26-28, the Satoshi Roundtable in North America. They remain adamant on a
block size increase to 2 MB. The matter keeps resurfacing and there
doesn’t seem to be consensus.

Perhaps price will rebound off the wedge trend line like it did when
Hearn’s damning article came out. Or not.

Coinbase CEO Brian, penned a controversial article on his position on
the block size debate, after attending Satoshi Roundtable, an invitation
only high profile meeting of bitcoin heavyweights. In it, he voices his
concerns on Bitcoin Core’s Segwit and roadmap to 2017, and proposes
multiple teams work on the bitcoin protocol.

“the systemic risk to bitcoin if Bitcoin Core was the only team working
on bitcoin.”

Gavin Andresen was also clear on his
thoughts on
the attempt at consensus in North America, saying:

“If the block size limit is not increased, we will see more off-chain
solutions. It is, however, a symptom of an unhealthy network that is
becoming increasingly unreliable and vulnerable to attacks.”

Japan is the only country amongst the 7 major industrialized countries
that taxes bitcoin, an 8% consumption tax that was the subject of
discussion by Legislators at a lower house budget committee meeting.
Nikkei
reports the island’s Financial Services Agency will submit a landmark
plan on regulating virtual currencies to the Diet, the Japanese
Parliament.

It is interesting to observe countries competing on regulating bitcoin,
as a competitive advantage. Addressing the Finance Minister, Tsukasa
Akimoto, a member of the ruling Liberal Democratic Party said

“Can’t you consider not imposing consumption tax on bitcoins in line
with the international trend?”

Breaking $352 will be bearish, and will leave the gate wide open to
further drops to $300, at which point a re-evaluation of targets will
be required.